I saw this and about halfway through I thought it was pretty stupid and boring, until they got to the punchline and I truly laughed out loud.

I understand the ad, the laptops are very durable, but let’s be honost, this ad is just creepy. What was Lenovo thinking?

I love Lenovo computers I think that they look great, even though they aren’t flashy and are kind of boxy, but I like simple designs. They are very durable as well.

The Zune is a pretty cool player and no matter what others say I am still willing to suggest it to friends and family as a good music player, I don’t think that anyone can dispute the fact that being able to pay $15 a month and download all the music you want is one heck of a cool idea.

Anyways Gizmodo posted this ad and I think that it is a cool looking ad, a lot better then their older ones.

I think that Apple has a brilliant marketing idea, since everyone blogs about all the ads they make, if they just make an ad a week or so they are always being talked about. They truly are brilliant and seem to make really amazing products as well.

Check out the new iPhone Ad, Watered Down, Below or you can see a higher quality one at Apple.com.

Ask.com has recently released a new look and feel for there website, it looks great. It has a very 3D style to it with glossy buttons and so on. I like how it looks but it still doesn’t have the greatest algorithm for searching sites.Well, TechCrunch got a hold of a new ad for Ask.com and uploaded it to YouTube. The commercial however is terrible! It is of a guy singing “I got what I was looking for.” What he was looking for what “chicks with swords” and supposedly, because the algorithm is so good (not as good as google) he got what he wanted, so in the commercial there are a bunch of girls dancing and singing behind him holding swords.

At the end of the commercial in the search box they write, “experience instant gratification,” “The algorithm.”

Even though the commercial is bad I still suggest checking it out after the jump.

END_OF_DOCUMENT_TOKEN_TO_BE_REPLACED

Apple has released 3 iPhone ads that are running on TV now, but you can also seem them on the Apple.com website here.

They are pretty cool, showing off some of the more interesting features of the iPhone. The music is a little weird but all in all they are cool.

The Ads also give a little bit of interesting information that we didn’t know until they were released and that is when the iPhone will be available. That will be June 29th. Just making it in the month of June.

This is great news and cool ads but there has been some buzz around the internets that there won’t be very many iPhones per store when it launches. I’ve heard numbers as low as 40 per store. That isn’t a whole lot and since I have also heard that some AT&T stores have been holding private pre-order lists (which is against company policy) It may be very difficult to get one.

Well I do have the ads here from youtube if you would rather check them out here, videos after the jump.

END_OF_DOCUMENT_TOKEN_TO_BE_REPLACED 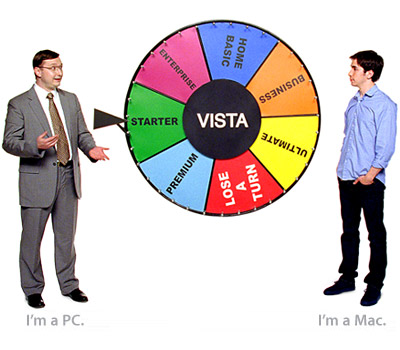 3 New get a Mac Ads were released.

Watch the new Ads here at Apple.com. My personal favorite is “Party is Over.”

These ads are pretty neat I actually really like the Flashback one its hilarious.

No one like intrusive advertising, a few banner ads aren’t bad but when the advertisment gets thrown into the content as if it was part of the content that is just too much. One of these items is intelliTXT, that advertiser that looks at the words on your web site and double underlines some of them and if your mouse touches the word it pops up a window with an advertisment in it.

Why do websites decide to do it, obviously because they want to monitize but isn’t this the worst way to do so. I don’t want to be on a website that bombards me with advertising constantly, especially when I may not even realize that I will be until that darn windows pops up and I have to hit that little X in the corner and hope that it isn’t one of those crazy intelliTXT clones that may take me to the advertisers website because the X is part of the link, like one of those crazy banner ads that look like Winows dialog boxes.

I think that websites should rethink what advertisment programs they use on their website so that we all have a better time on the net.

This is the commercial that aired last night during the Academy Awards.

Scootinger’s Blog has a post with a picture of a Mac user vs. PC user comparison from the September 1996 issue of MacAddict. It looks pretty similar to the I’m a Mac, I’m a PC ads of today.

Digital Music Group (DMG) has made a deal with YouTube sharing over 4,000 hours of video content. Including episodes of Gumby and I Spy. although they are a strange start but I think that this is something that Youtube needs to monotize and start making some money.

DMG will also be sharing some music videos and in return Youtube will share revenue from ads that are on the pages with the content on it.