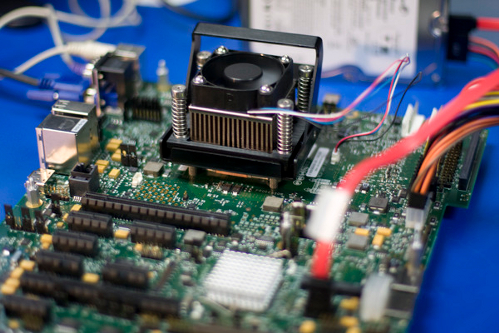 In addition to reducing the price of current CPUs, AMD also plans to launch the Phenom II X4 950 in the second quarter with a core frequency of 3.1GHz.

Sources familiar with AMDs future processor plans said on Wednesday that the chipmaker plans to release dual-core CPUs based on the K10 micro-architecture under the AMD Athlon X2 brand-name.

The new processor, the AMD Athlon 64 X2 6500+ will be released in early September. It will run at 2.3GHz with 1MB of L2 cache, 2MB of L3 cache and have a dual-channel DDR2 memory controller. It will have a thermal design power of 95W and should be compatible with the majority of AM2+ motherboards.

The 6500 is based on the Kuma code-name design and will feature an unlocked multiplier allowing enthusiasts to easily overclock.

A screenshot of the Snow Leopard system requirements has shown up online and includes the following:

Read that first one again, this means that PowerPC processors aren’t being supported in Snow Leopard.

I’m not surprised that they are doing this, by the time Snow Leopard is released the newest computers with PowerPC are going to be roughly 3 years old. It isn’t like Apple won’t support 10.5 any more, Apple still supports OS X Tiger and Leopard will be support for many months after the release of Snow Leopard.

I think that this along with the 3-core processors from AMD are all examples of how they really are trying. I’m not sure exactly whether or not 45W desktop processors will really help them but I think that the few that are tech savvy enough to really think about how much power your processor uses would be interested in the processors.

The processors should be launching around March and later on we will begin to see three-core 45nm processors.

I think that AMD is smart to have this type of game plan, the marketing possibilities of a 3-core processor would be pretty amazing. I think that just the name “tri-core” just sounds really cool. I love the fact that AMD is taking a more interesting approach to making processors, I also think that if AMD can take the momentum of having a “true quad-core” processor and run with it, they will start to catch up with Intel.