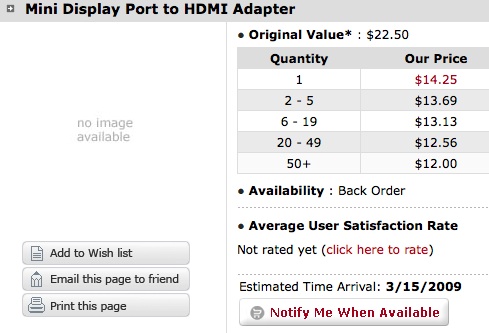 MonoPrice has finally published an estimated arrival date for its Mini Display Port to HDMI adapter. The date for the cable is March 15, 2009 and will give all of you recent MacBook, MacBook Pro, and MacBook Air owners the ability to connect your brand new notebook to anything that can take the (clearly) more universally excepted display connection.

A report in the Nikkei Japanese business journal claims that “Pioneer Corp. will pull the plug on its loss-ridden television business and shift its DVD player operations to a new venture with Sharp Corp. in a sweeping overhaul”.

This is very sad news if it is true. Pioneer (in my opinion and many others opinions) makes the best televisions in the world. Their Kuro HDTVs look better than any other TV in the world.

I really hope that Panasonic picks up the ball and starts making really good Plasma TVs. Although I don’t own a Plasma I do recognize that Plasma is a superior technology to LCD in terms of picture quality. 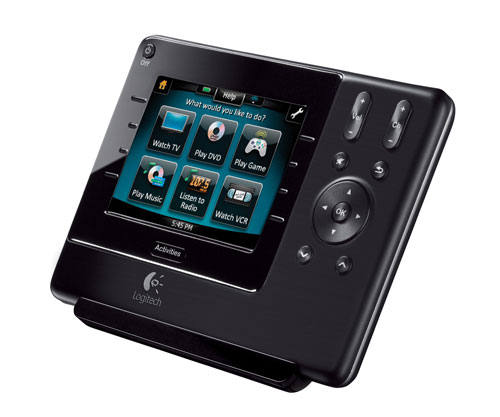 A replacement to the Logitech Harmony 1000, this update adds anodized aluminum and customization to the 3.5-inch touchscreen controls. Users can add or remove buttons that appear under certain conditions. The 1100 also adds support for RF-based devices rather than just IR devices.

HDfury2 is a brand new adapter that allows users of displays without HDMI (or with HDMI that doesn’t support HDCP) to watch 1080p content via VGA or Component video.

The device has a built in deciphering converter that makes whatever HDMI box that you plug into it think that it has an HDCP connection with the display. There is also an audio jack that channels analog and digital optical formats.

It works with both PAL and NTSC and will cost $249 when it ships next month.

Roku has open sourced its Netflix player for all of you clever hackers and developers to play with. This means that you should be able to build your own applications built for the box, or modify the software on the box to do whatever you want it to.

This would be good enough news but Roku will be releasing a software update later this year that will add the ability to watch content from other big name providers. The first thought that came to my mind was the ability to stream Hulu videos (which would mean I would buy the Roku player instantly without even thinking about it) but my guess is that we will see YouTube first.

A website is now selling what it claims to be region-free Blu-Ray players. The site wants €499 ($785), for the Panasonic DMP-BD30. The price for this player, unmodded, is around $475 so you’re paying quite the premium for the ability to play Blu-Ray discs from other regions.

If you’re good with a soldering iron you could purchase a mod kit and do it yourself, the kit is a much more reasonable €89 ($140).

I don’t necesarily doubt the fact that these are region free players but what I don’t know is whether or not you will be able to upgrade the players firmware later on or not. If you upgrade the player yourself you will surely void your warranty and although you probably won’t ever use it it’s still possible you may need it.

Yesterday Roku and Netflix released the first of a few set-top boxes that stream content from Netflix’s Watch Instantly service. The service which began early last year allows subscribers with the $8.99 plan and up the ability to stream a set of movies and TV shows from the Netflix library

This Roku Netflix Player is available immediately for a reasonable price of only $99.99. The set-top box is fairly small, 1.75-inches tall, 5.25-inches wide, 5.25″ deep. In that small space the player has HDMI, component, composite, and S-Video output as well as digital optical (no surround sound) and analog stereo audio output. Keep in mind that there are only a set of composite cable in the box so if you want to use another output you’ll have to find your own cables. Composite shouldn’t be too horrible an option though since the box is only capable of outputting 480i no matter what cables you use only outputs 480i unless you use HDMI in which it can then output 480p, although a firmware update could technically change this in the future.

When it comes to connectivity the player has an ethernet jack and Wifi, supporting WEP and WPA encryption. The device also has a simple and easy to use 9-button remote.

To be able to watch movies and TV shows on the device though you are going to have to populate your queue online with your computer, that means you can’t browse the watch instantly library on the device itself and if you want to watch something new you have to walk over to your computer and add it. But, once the movie/TV show is added to your queue it takes only a minute or so to show up on the Roku player and you don’t have to have your computer on to watch video.

Movie playback starts in less than a minute and you can fastforward and rewind with you remote, but you can also navigate through the movie by viewing thumbnails of the movie at 10 second intervals. Video quality is the same as it is on a computer and the video bit rate maxes out at 2.2Mbps.

One cool feature about viewing video on this is that when you stop the video the box tells the Netflix servers where you left off so if you want to pick up the movie again on your computer or on another Roku player in another room you start off right where you left it. Netflix currently allows each subscriber to link up to 4 devices to their account.

Right now there isn’t a whole lot of content available but Netflix is making new deals all the time with content providers.

I don’t know if I would suggest anyone to buy one of these, we already know that Netflix has also partnered with LG and two other yet-to-be-named manufacturers to make similar boxes, so I think it would be best to wait until those set-top boxes are announced to make your decision.

I’ve been debating on purchasing a TV Tuner for my PC for the longest time and this deal may actually get me to purchase one. The KWorld PlusTV ATSC 340U, which Buy.com has on sale for 34.99, is a great little tuner.

The PlusTV is an ATSC/Clear QAM tuner and comes with a small antenna so that as soon as it gets delivered to your home you’re pretty much up and running to pick up either over the air broadcast television or Clear QAM signals from your cable company.

The tuner also comes with ArcSoft TotalMedia which lets you watch and record shows just like a DVR. The tuner should also work with Windows Media Center for the easiest set up.

This really is a great deal and an easy way to get a tuner in your computer. I’ve been debating on purchasing one of these mostly because I’m not sure if I would actually use it and I don’t know if I want to spend the money on it. I want one because I don’t have cable and if I could record over the air programming I would be able to collect all of the GOOD TV shows that are broadcast in my area and be able to watch them in bigger chunks (instead of sitting down to watch TV at night and finding absolutely nothing on the 4 channels I happen to get over the air).

If you’d like to pick one of these up for yourself you can get it from Buy.com or Amazon.com

Future Shop has announced that between March 7 and April 3, customers who own HD-DVD players have been invited to return their players to Future Shop and receive $100 off either an LG or Samsung Blu-ray/HD-DVD combo player.

Future Shop will even accept players that haven’t been purchased from Future Shop.

Unfortunately the offer is for a combo player but I guess if you’ve already began building a library of HD-DVD discs it wouldn’t be a terrible thing to have a player that is capable of playing back those discs.

Currently the combo players are going for $499.99 at Future Shop so the $100 credit will bring the price down to $399.99, which is about the same price as a PS3 so it isn’t that bad of a deal since you won’t have to re-buy all of your already purchased HD-DVD discs.

This is a great move Circuit City if you have been affected by the format war and your player qualifies head on over to Circuit City and see if you can get them to let you return it.

One thing I want to mention about Circuit City, in the past year I’ve had two brand new consumer electronics stores show up in my area, first  was Best Buy, and when I heard that a Best Buy was coming in I was ridiculously excited but was then incredibly disappointed when I realized that Best Buy was a terrible store. Then Circuit City came in and every problem I had with Best Buy was exactly how I wanted it to be with Circuit City… fixed… Circuit City is a great store and I would go there and purchase products from them, even if they are more expensive than they are at Best Buy, just because the store functions so much better than Best Buy does.

In early January I posted about the TV Converter Box Coupon Program that would be giving out coupons worth $40 towards a digital TV converter box.

There isn’t much to report on here, I haven’t gotten mine yet but as soon as I get it I plan on purchasing one as fast as my car can take me to my local consumer electronics store (I’ll probably go to Circuit City).

But to tide all of you over until you get yours you can admire the picture above.