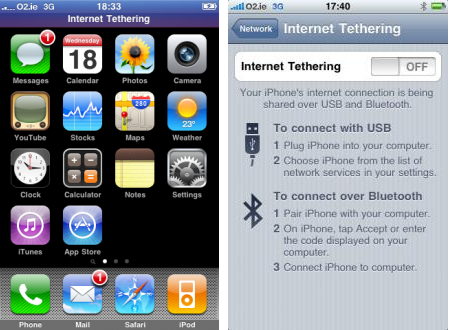 Rumors have it that AT&T has been reallocating its EDGE service to the weaker 1900MHz band this move is supposed to improve 3G strength in HSPA devices.

I currently am relying on EDGE service with my first generation iPhone and even though I live in a small city of 30,000 or so I haven’t seen any signal issues even when I’m miles outside of town.

It’s odd that AT&T would decide to do this now, unless they are going to begin really pushing 3G coverage to more and more areas and (obviously) eventually phasing out 2G altogether.

I have a feeling that there won’t be too many people affected by this, hopefully AT&T will be smart enough to know where this strategy would work and where it wouldn’t be a good idea, but let’s face it, AT&T has made some mistakes in the past and will obviously make more in the future.

Today Apple posted a guided tour of the iPhone 3G and iPhone 2.0 software. iPhone pricing has also been announced.

So, there’s this memo that you may or may not have heard about yet that was sent to AT&T retail store employees that basically says that employees can’t take vacations between June 15 and July 12.

Last year a similar thing happened where employees couldn’t take vacations between June 15 and July 15, and we got the iPhone on June 29. So one would expect that this memo means that we should be seeing the next generation iPhone around the same time as we saw the original iPhone last year.

The memo cites “an exciting Summer Promotional Launch,” as the reason for why employees aren’t allowed vacations during that time. I’m assuming that it doesn’t mean they are going to be coming out with a crazy new flip phone, no this is probably pointing towards the iPhone.

AT&T recently took over as the provider of Wifi hotspots from the previous provider of T-Mobile for 7,000+ Starbucks nationwide. AT&T had already announced that current AT&T broadband customers would also have free access and would “soon extend the benefits of Wifi at Starbucks to its wireless customers,” but up until now no signs of it had come about.

What’s great about this news is that if you have an iPhone but would also like to access the Wifi for free on your notebook, you can change the user agent of your browser to the iPhone’s User Agent and by inputing a valid iPhone phone number you will also get access on your notebook.

AT&T officially launches their new mobile TV service today and will be available on May 4th. The service uses MediaFLO technology which means that it uses a separate network devoted entirely to the TV signal.

The service will be launching in 58 markets and unfortunately, I do not live in one of those markets, so I have to show you other peoples experience with it. The lineup will include 10 stations total and there will be 2 phones available that support the service, the LG Vu and the Samsung Access.

“The quality of the video is very good. If you’re in an area where you don’t get many “bars,” you may start to see some digital breakup. There’s an antenna that sticks out of the top of the phone to improve reception but it can be pushed back when when you’re not using the TV service. The channel selection is good but I’d like to see more channels and more live networks instead of the re-purposed programming.”-MyFoxUtah

In short, some people think yes, some people think no. I happen to believe that the iPhone won’t be sold for $199 for another couple years, it is still really new and the amount of money it costs to product the iPhone means that selling it for $199 doesn’t really make sense, especially since Apple has become to accustomed to selling hardware at a profit through the sales of the iPod and all of their computers.

I would probably buy the 3G iPhone if I could get it for $199 but it just doesn’t seem very likely.

AT&T to cut the price of Apple’s new iPhone

I happen to think that the Microsoft Surface technology is pretty freaking cool. Possibly one of the coolest things I’ve seen in a long time, kind of like a giant iPhone, except more Windows Media Center and less Front Row (which may or may not be a good thing). AT&T recently announced that they would be deploying Microsoft Surface to 12 stores in 4 different cities on April 17th.

The app that Microsoft Surface will be running will allow customers to look at accessories for phones, rate plans, sample ringtones, and compare multiple phones side by side will really get some people in to these stores, if not to buy phones then at least to check out this cool new way of looking at phone features.

Check out the video after the break showing off some of the features that Surface will have when it gets put into stores on April 17th.

END_OF_DOCUMENT_TOKEN_TO_BE_REPLACED

Starbucks announced yesterday that they would be dropping T-Mobile as their Wifi provider and will be switching to AT&T.

Along with this new provider deal Starbucks also announced that Starbucks card holders will get 2 hours of free access to the hotspots. The new pricing for access will be $3.99 per visit or $20 per month.

Apple as we all know has been working with both AT&T and Starbucks in regards to the iPhone. I’m wondering if Apple had anything to do with this new agreement.

Already iPhone users can use the Wifi at Starbucks to purchase songs and AT&T is the cell service provider that Apple chose to debut the iPhone on.

In the UK O2 has already made a deal where O2 iPhone users can access many Wifi hotspots around the country, does this mean that Apple and AT&T are going to announce free access to these new Starbucks hotspots as long as you are accessing them with an iPhone? I hope so, it would be a great way for Starbucks to get some of my business (I think I may be the last person on earth who has never stepped foot inside of a Starbucks).